August used to be the wettest month.

The sogginess thwarted my fall photography plans– arghh! The colors never popped. Except the sky was pristine blue, after having as many as 600+ fires in Alaska at one time, this summer.

With an annual total of 15.01″, more than half of this year’s precipitation so far has fallen in September alone.

This is also the third wettest month in Anchorage since records began, with only August 1989 (9.77″) and August 1997 (8.37″) experiencing more precipitation.

This week’s storm dropped an official total of 2.8″ of snow at the airport. That accounts for all of this month’s snowfall and makes this September the fourth snowiest September on record.

Another article that I found two days later, after it had rained 14 days in a row. The chart shows how I got spoiled, photographing the fall colors in 2011:

A wet Tuesday in Anchorage marked the 12th day in a row that the city has seen measurable rainfall, with more precipitation on the way, according to the National Weather Service. The rain has pounded Alaska’s largest city and has already surpassed the monthly rainfall average for September — and is expected to continue for at least another week.

On average, the NWS says, Anchorage sees 2.99 inches of rain during the month of September.

This is the fourth consecutive year Anchorage has seen higher-than-average rainfall totals. 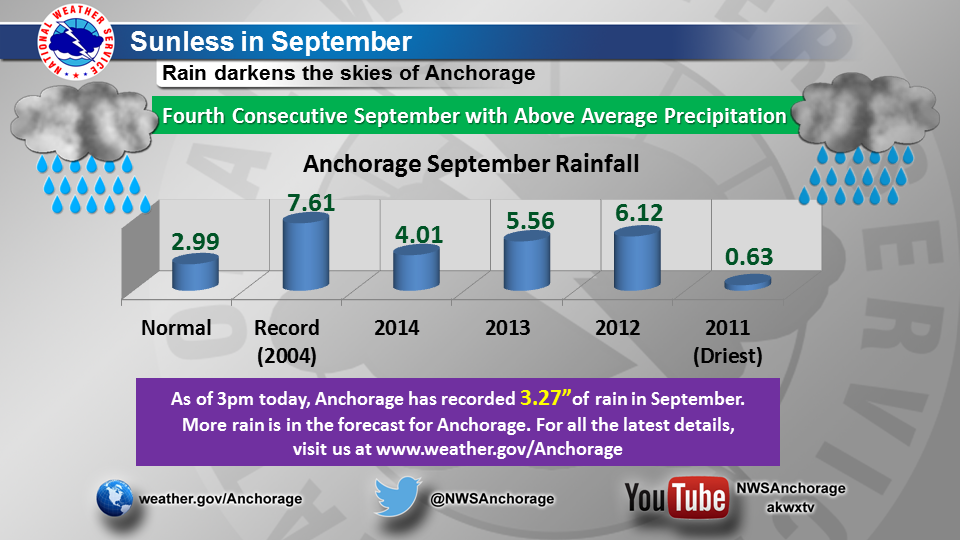 It’s raining in #Anchorage! Here’s how this Sept. stacks up against other years. Check out your latest 4cast. #AKwx